I like to do things – or at least those things I don’t really enjoy doing – fast. This is why I really appreciate enabling technologies that help me do things quickly. For example, I love Spring Boot because I can build all the boring parts of a service or web app quickly. Or at least assuming I’ve got my development environment setup correctly I can. It’s never that simple though. The new guy that just started will need three days of setting up his dev environment, so that will keep him from building anything for at least part of this sprint. Depending on how complicated the environment was when he started, and how far the environment has drifted from the docs our team wrote, maybe it takes even longer. Of course, then deploying to QA and Prod is kind of slow, and any issues mean calling the dev team. Oh, and then there is that 3 AM page because the production environment on server node 3 doesn’t quite match the other nodes.

This probably sounds familiar to a lot of developers. Just replace Spring Boot with the killer tech you prefer that makes your life easier for that brief part of your day when you actually write code instead of the ever expanding set of responsibilities that might even be called something like DevOps.

The purpose of this article is to introduce an opinionated proof-of-concept infrastructure, architecture, and tool chain that makes the transition from zero to production deployment as fast as possible. In order to reach the widest possible audience, this infrastructure will be based on AWS. I believe if you have recently created your AWS account you can deploy the infrastructure for free, and if not it’s around $3 per day to play around with, assuming you use micro instances. The emphasis here is on speed of transition from dev to prod, so when I say opinionated I do not mean my opinion is this is the best solution for you or your problem – that depends a lot on your specific problem. I will go into more detail on the opinions expressed in this solution throughout this article. At the time of this writing, the actual infrastructure implementation is lacking certain obvious properties needed for use in a real production environment – for example there is a single Consul server node. So keep in mind this is a proof of concept, which still requires effort before using in production settings.

I can develop a service very quickly. For example, I can generate the skeleton of a Spring Boot service using Spring Initializr, and implement even a data service very quickly. Any gains I make in development time can be lost in the deployment process. Production deployment can be arduous and slow depending on how the rest of my organization works.

Even outside of production there are potential roadblocks. What if I need a development environment that is exposed to the public internet to test integration of my service with another cloud based service?

Docker solves many of the issues of environment drift and dependency management by packaging everything together. However, to be honest if my organization – or yours – was having a hard time getting me the resources to deploy my micro-service, I doubt introducing Docker will help with timelines in the near term. In the long run, it may be an easy sell to convince an infrastructure operations organization to stop deploying custom dependencies for each language supported, and instead create a homogeneous environment of Docker hosts where they can concentrate their efforts on standardized: configuration, log management, monitoring, analytics, alarming, and automated deployment processes. Especially so if that environment features automatic service discovery that almost completely eliminates configuration from the deployment process.

In short, it doesn’t matter if you are trying to overcome the politics or technical debt of a broken organization, or you are bootstrapping the next Instagram. If you want to deploy micro-services this article presents a way to use force-multiplying tools to turn a credit card number into a production scalable, micro-service infrastructure as quickly as possible. 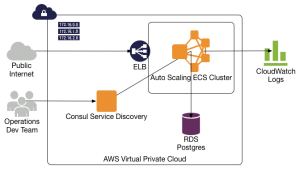 The diagram above shows an abstraction of the AWS infrastructure built below. The elastic load balancer distributes service requests across the auto-scaling group of EC2 instances, which are configured as EC2 Container Services (ECS) running our Dockerized service. Each ECS instance includes a Consul agent and Registrator to handle service discovery and automatic registration. Database services are provided by an RDS instance. Consul server is deployed to a standard EC2 instance – this will expand to several instances in the production version. All of this is deployed in a virtual private cloud (VPC) and can scale across multiple availability zones.

Setting up your Development Environment

For our development environment we’ll be using Otto. Otto is a tool that builds management of dependencies and environment setup on top of several other tools including Vagrant, Terraform, Consul, and Packer. As of the time of this writing, it is very early in development so potential for using in prod deployment is limited – especially for Java. However, for the dev environment we get some extra freebies not included by just using Vagrant – namely service discovery and automatic deployments of dependencies.

Dockerizing the Service and Distributing the Image

Since we used otto to build our dev environment, we already have Docker installed, and we can jump right in to building Docker images for our service.

At this point we have built and tested a Dockerized version of our service locally. We have pushed the Docker image to AWS. As you will see later, because we are using Consul for service discovery we will not make any changes to the Docker image, or have to add any additional configuration to deploy on AWS.

Building an Infrastructure on AWS

To setup the AWS stack, we will use CloudFormation to create a stack.

Once the stack is up and running, switch to the outputs tab. Here you will find some useful parameters for the remainder of this article. You should set the following environment variables using the name of the ECS cluster and the ELB URL:

With our cloud formation stack running, and all our AWS CLI tools installed on our development environment it is now a simple process to define the services we want to run on the ECS cluster.

Basically, in this section I’d like to try to answer questions about what is ready for production use and what is not. I’ll also mention what I’m continuing to work on.

Otto is definitely not ready for production use in creating production environments at this point, but of course we didn’t try to use this feature here. That opinion is primarily based on my experience trying to use it for Java. For other languages, assuming it is actually capable of creating a production environment, you would need to evaluate that environment with respect to your standards and needs.

The portion of Otto we used in this article is not on the traditional production critical path. As such, evaluation for adoption is a bit different. If we are talking about experienced developers they should be able to pick it up quickly to respond to any issues they might encounter on their machine. Otto utilizes Vagrant for much of the heavy lifting on the development environment and as such has been very stable in this regard. There are currently enough advantages to the dependency definitions and automatic service discovery setup to convince me to adopt Otto now for development use. I’m currently working on picking up Go as quickly as possible so I can help fix any issues I encounter.

Docker is based on Linux containers, which have been around for awhile now. Take a look at who’s using Docker in production today. Then forget that – mostly. Appeal to authority is my least favorite argument for adopting software or technology. You’ll obviously have to decide for yourself if you are ready to commit to using Docker, but if you are working in a micro-service architecture you need to consider what happens with downstream dependencies – including libraries or language VMs – for those services as they mature.

A few reasons I’m sold on Docker include:

A few reasons not to use Docker:

The AWS infrastructure I used here still needs some work. As I mentioned previously it’s not ready for production, here are some reasons why:

Additionally, maybe a cloud formation script is not the right answer – perhaps Terraform integrated into Otto as a production deployment target could be. I plan to continue to improve this, but this is certainly an area where more eyes will be better so send me PRs.

Note: Unfortunately, I have seen production environments in small companies that lack many of the requirements for a production level environment I listed above, so for those reasons this may be a better fit for production than a one off internal solution since there is at least a pathway to all those requirements.

I’m currently working on automating production deployment of Docker images. So, ideally I’ll have an additional write up on that soon.

We made use of simple DNS based service discovery using Consul, but we did not dive into further capabilities of Consul. In a future update I’ll go into how to store additional configuration using the key/value store in consul as well as how to move away from well-defined ports which enables packing more like-service instances on each host.

There are plenty of frameworks and libraries that have helped developers move quickly and deliver services faster, but even with configuration management, continuous deployment pipelines, and DevOps practices there is a gap between development and production. That gap I believe is defined by the expectations formed around delivered artifacts. Docker simplifies those delivered artifacts, and moves many former environmental dependencies into the build pipeline. Adding Consul to the mix further reduces environmental configuration hazards by allowing simple service discovery. By standardizing environments around Docker artifacts we can increase deployment velocity, and decrease risk of dependency issues in all environments. Finally, using AWS ECS to host Docker containers is a quick and easy way to get started with Docker that allows you to move from development to production very quickly.